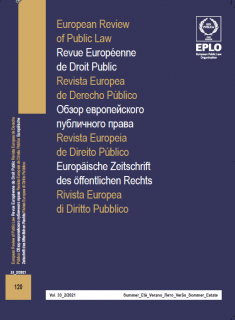 In this ERPL issue, a variety of topical issues are discussed whereas the section of chronicles is in its most part influenced by the COVID-1 pandemic and the need of combating its effects.

The issue starts by an article (its first part is published herein, as it is divided into two parts that will be published in two consecutive ERPL issues) on Iternational Environmental Law. The article maintains that irreparability or irreversibility is in the very essence of much environmental damage depending on the scope and extent of long-range adverse effects of human activity causing degradation and injury. States’ practice, judicial decisions, the pronouncements of international organizations allow the emergence of some basic principles governing international environmental law. It is generally accepted that States have a duty to prevent, reduce and control pollution and environmental degradation and a duty to cooperate in reducing environmental risks. As a consequence, the environmental damage to be caused will result in responsibility and liability of such States.

Next, an article explores the rise of a new form of governance: Global governance, i.e. political cooperation among transnational entities, was until recently the prerogative of States; nevertheless, increasingly nowadays, International Organizations join forces with for-profit private entities and civil society to carry out these functions. This new form of governance, named here International Public-Private Partnerships (IPPPs), defies categorization under traditional legal frameworks, opening up an unexplored research agenda. This contribution aims to fill this gap, help interested parties understand their legal rights and duties and spark a much needed academic discussion.

Last but not least in the section of Articles, the next article examines the SOLVIT network as an alternative mechanism for internal market problem-solving. SOLVIT serves two functions as a key tool for European governance: guaranteeing effective protection of individual rights and ensuring compliance with EU law by national authorities. Its current rele­vance and potential are showcased in the application of three Regulations, on Mutual Recognition, the implementation of the Single Digital Gateway and the European Labour Authority, and in the actions envisaged to strengthen SOLVIT in the 2020 Single Market Enforcement Action Plan. Regarding the necessary future re-configuration of SOLVIT, despite the substantial changes that are needed, it is proposed that it should remain as a voluntary mechanism.

In the section of Chronicles of Constitutional Law, it is to note that most of the chronicles deal with the developments imposed by the fight against the COVID-19 pandemic, which has influenced our lives during this period.

In this section, thus, the ERPL is glad to welcome the first chronicle examining the Brazilian Constitutional Law developments in its pages, after the implementation of the EPLO Brazilian Chapter. This first chronicle offers a historical approach to the main characteristic elements of constitutional regimes, from the independence of the country to nowadays, with emphasis on the current Constitution, which marks the re-democratization of Brazil. With regard specifically to this chronicle on the year 2020, special attention was paid to the effects of the COVID-19 pandemic on constitutional law.

The chronicle on Georgian Constitutional Law deals with the restriction of human rights and the state of emergency declared by the authorities due to the devastating effects of the COVID-19 pandemic. Since, according to the state officials, the restrictions stem from public need, the President is authorized by the Constitution to restrict the rights and freedoms guaranteed by the Constitution during a state of emergency or war. As some restrictions cause discomfort and irritation of society, it is important that countries try to restrict the fundamental rights to the lesser extent when fighting a pandemic. However, as the court said, at this point the most important thing is the life and health of the people.

The Constitutional Law chronicle coming from Italy examines the new priorities on the government agenda, imposed by the management of the COVID-19 pandemic. From a regulatory point of view, the spread of the pandemic and its fight as well as the economic crisis related to the health crisis have been addressed by the Government through the prevalent and contextual recourse to emergency decrees (DL) and decrees of the President of the Council of Ministers (DM), and to decree-laws respectively. To counterbalance a centralization of powers in the hands of the Government, Parliament has enhanced the value of instruments of control and direction, in order to be constantly informed about updates and developments in emergency management. The President of the Republic on several occasions expressed closeness and support to the population and invited the Government and Regions to a sense of responsibility and unity of commitment.

The Constitutional Law chronicle coming from the Netherlands focuses on constitutional questions posed by the COVID-19, such as the legal basis for measures that limited fundamental rights, the outdated nature of Dutch emergency law and the functioning of Parliament in pandemic times. The Temporary Corona Act struck a balance between the right to health and effective government on the one hand and a wide range of other fundamental rights and the need for democratic involvement on the other. The SyRI-case, concerning an algorithmic fraud detection system, constitutes a hallmark decision when it comes to judicial control of new technologies on grounds of human rights. Pending proposals to amend the Constitution deal with extending the grounds of discrimination in Article 1 of the Dutch Constitution and the introduction of a corrective referendum.

In the section of Administrative Law, again the ERPL is very glad to publish the first chronicle containing a presentation on Brazil’s administrative law. The first section approaches the foreign influences it absorbed, as well as the paths it followed in its historical construction; the second section indicates the concepts most used in the literature and in positive law; the third deals with the great ideas that have prevailed among administrative law theorists and practitioners; the fourth is about the degree of uniformity or plurality that exists in Brazil regarding an administrative legal regime; finally, the fifth section discusses possible orientations for the reform of current Brazilian administrative law.

The second chronicle first outlines and elaborates on the content of the new Investment Screening Act (Act No. 842 of 10 May 2021), and second, and on this basis, it discusses its provisions in light of Danish law on expropriation. The Act constitutes an entirely new regime in Danish legislation, as thus far foreign direct investments in Denmark have been subject to very limited regulation.

The third chronicle, coming from France, points out that although the administrative jurisprudence of the year 2020 was obviously marked by the decisions relating to the health crisis linked to the COVID-19 epidemic, the past year should not only be summed up in the light of the health crisis. The ordinary activity of the administrative jurisdiction was marked by some important decisions in other fields such as on the law on foreigners, acts of soft law or even litigation on orders of Article 38 of the Constitution.

The fourth chronicle outlines the main administrative reforms approved in Italy during the year 2020, in order to reduce the risk of contagion from COVID-19. A first legislative phase is characterized by the approval of emergency measures and the regulation of the administrative activity regarding the public sector; other legislative measures were adopted to strengthen the National Health Service. During the subsequent legislative phase, many regulations were approved to support economic and social activities.

The last chronicle in this section is devoted to actual amendments of the administrative law occurred in the field of state antimonopoly control in Russia and in public and corporate procurement in 2020. In the competition area are analyzed amendments to the federal law “On competition defence”, novelties in judicial interpretation, as well as the main innovations and changes to the regulations governing the contract system in public and corporate procurement.

In the section of Jurisprudence, the chronicle on French Constitutional Jurisprudence analyzes the decisions of the Constitutional Council that were rendered in 2019. The year was particularly marked by the birth of a new category of decisions, the decisions RIP (shared initiative referendum). Furthermore, a stability in a priori litigation and a very slight decrease in a posteriori litigation is observed.

The review of an interesting selection of books coming from Italy follows.

This ERPL issue concludes with the presentation of four books received by the EPLO Library.

M. Semih Gemalmaz, Introduction to International Environmental Law: From Initial Steps to Institution Building for the Conservation of the Environment - Part I [IN ENGLISH]

J. Kielin-Maziarz, Understanding the Rule of Law in the Agenda 2030 and in Polish Law [IN FRENCH]

L. López-de-Castro García-Morato, Reinforcing the Governance of the European Internal Market: The SOLVIT Network [IN ENGLISH]

A. Imedashvili, Georgia [IN ENGLISH]

M.J. Vetzo, The Netherlands [IN ENGLISH]

C. A. Sundfeld, Brazil [IN PORTUGUESE]

Introduction to International Environmental Law: From Initial Steps to Institution Building for the Conservation of the Environment - Part I

Reinforcing the Governance of the European Internal Market: The SOLVIT Network