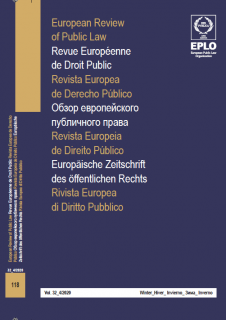 In this ERPL issue several papers deal with the effects of the Covid-19 pandemic, which was spread in the world in 2020.

The issue starts by an article on the health crisis shaking Europe since the beginning of the year 2020, a crisis that offers the opportunity to the European Union to evaluate the resilience capacity of its legal system. Using both soft and hard law, its institutions mobilized the wide range of acts offered by EU law on a double register, that of activation and the one of adaptation. In the final analysis, after a long time, the Union can now be presented as the Europe that protects.

The second article seeks to examine, with a focus on legal protection and administrative justice, the European system for the coordination of social security system and the posting of workers within the European Union as provided for in European Union legislation and the problems arising from the transnational acts issued in this context in relation to effective legal remedy.

The third article of this ERPL issue deals with “Les Architectes des Bâtiments”, one among the most effective tools for the protection of monuments in France. The discretionary power which they enjoy in expressing their opinions, sometimes binding, is confirmed by the jurisprudence; so attempts to weaken this institution are very detrimental to the protection of architectural, historical and artistic heritage.

The fourth article examines human rights violations by corporations that operate in more than one country. Legal scholars have almost exclusively focused on corporations from economically developed countries while corporations of other countries have been largely overlooked. This article attempts to narrow this research gap by studying such corporations in their own right and as competitors of EU-based corporations, proposing also a research agenda with linked but different issues.

In the section of Chronicles of Constitutional Law, the first one, coming from Germany, deals with relevant developments in the country, such as the amendment of the Basic Law in 2019, aiming to reform the federal financial relations; the decision of the German Federal Constitutional Court that it may apply the EU Charter of Fundamental Rights if a judgement based on pro­visions fully determined by EU law is examined; and decisions in the field of human rights.

The chronicle on Hungarian Constitutional Law is concerned with the fact that in 2020 the need to reduce the devastation of the COVID-19 pandemic required the application of special legal instruments; in Hungary the introduction of the so-called emergency situation (‘veszélyhelyzet’). Several provisions of Hungary’s Fundamental Law needed to be amended, resulting in the Ninth Amendment of the Fundamental Law of Hungary. In this context, the most important decisions of the Constitutional Court and a short introduction of the Ninth Amendment are presented.

The following chronicle maintains that in dealing with the effects of the COVID-19 pandemic in Poland, the ruling majority adopted a very specific approach, which contributed to a further deterioration of the rule of law. As a result of the circumstances Poland faced when holding its presidential election, for the first time in history, the country did not hold the election on the scheduled date. The legislation and measures taken by the government with regard to judges are also examined in this chronicle.

The Constitutional Law chronicle coming from Romania presents significant developments in the constitutional field in 2019, a year influenced by electoral competition. The political discourse, focused on the issue of integrity in public office, fighting corruption, and limiting the Government’s legislative power, was reflected in other acts with political and legal significance. In this context, landmarks from the jurisprudence of the Constitutional Court are presented, especially regarding the referendum, the revision of the Constitution, and the elections for the office of President of Romania.

The objective of the following chronicle is to review the most significant legal and judicial events of 2019 in Spain. In this period, regional and European Parliament elections were held, in May, as well as two general elections, in April and November. The legislative activity this year was limited: six ordinary laws and three organic laws were adopted, and eighteen Royal Decree-Laws validated. The Constitutional Court by Judgements no. 89/2019 and 90/2019 declared the constitutionality of the measures approved by the Senate under Art. 155 of the Spanish Constitution; by Judgement no. 19/2019 it declared the unconstitutionality of the investiture session held virtually; and, finally, bu Judgement no. 158/2019 it declared the unconstitutionality of several provisions of the Law of the Cortes de Aragón 8/2018, with regard to the updating of the historical rights of Aragon.

The second Administrative Law chronicle deals with the balancing between the legalistic and the practical required for the management of the COVID-19 crisis in Finland. Finland had a short emergency period on the basis of the Emergency Powers Act in the spring of 2020, but otherwise the situation has been regulated mainly through the Communicable Diseases Act and its amendments. The case law of the Parliamentary Ombudsman, the Chancellor of Justice and the Administrative Court is also examined.

The Administrative Law chronicle coming from Greece outlines the development of administrative law during 2019 through important court decisions and significant laws. It starts with Law 4622/2019 which systematizes and codifies in a single piece of legislation all the provisions governing the organization, operation and transparency of the Government and continues with Law 4604/2019 on an independent institutional framework aimed at promoting effective gender equality, prevention and fight against gender-based violence. Furthermore, four important decisions are analyzed: on the seizure at a third party; the Higher Education Institutions and recruitment of salaried lawyers; the compulsory expropriation of real estate; whereas the last one is a pilot trial concerning the judicial clerks and pay cuts.

The chronicle on Polish Administrative Law examines some events of great significance for the development of the science of administration in Poland held in 2019, such as the Conference dedicated to the creator of the Poznán School of Administrative Law Academics, M. Zimmermann, and two major scientific conferences on matters pertaining to public administration. On 12 December 2019 the High Administrative Court ruled in its decision II OPS 1/19 that the provisions of the laws on the civil status documents and private international law, do not allow in Poland the transcription of a foreign birth certificate in which two people of the same sex are listed as parents. The transcription of a foreign civil status document consists in a faithful and literal transfer of its content into the Polish register of civil status.

The next Administrative Law chronicle deals with the challenges imposed by the COVID-19 pandemic in the legislative and law enforcement area in Romania in 2020, which were finally settled by decision of the Constitutional Court. The Court set thus important guidelines for the regulation and execution of the extraordinary measures. The High Court of Cassation and Justice unified the jurisprudence of lower courts, recognized locus standi only to the social entities which can prove a harm to a private subjective right or legitimate interest and excluded from this legal remedy any actio popularis based exclusively on a public interest. The ECHR delivered an important decision impacting the national legislation on the administrative judicial review.

The last chronicle in this section is devoted to the legislative activity in Spain during 2020, which has been marked by the COVID-19 pandemic. Many of the laws adopted this year were elaborated to combat the economic and social effects that the pandemic has caused, but this did not prevent those laws from being used to incorporate solutions, such as in the area of teleworking. Some laws, for example in the area of education or polluting emissions, are equally important.

This ERPL issue is concluded by an Analytical Table of the contents of all four ERPL issues of the year 2020.

D. Blanc, The Resilience of the European Union’s Legal System in the Light of the COVID-19 Health Crisis: Between Institutional Activation and Normative Adaptation [IN FRENCH]

M. Domínguez Martín, Building a European Social Security System: Collaboration and Administrative Justice in the Posting of Workers in the European Union [IN ENGLISH]

A. Nissen, Beyond the Western ‘Business and Human Rights’ Tunnel Vision [IN ENGLISH]

A. Villanueva Cuevas, Spain [IN SPANISH]

The Resilience of the European Union’s Legal System in the Light of the COVID-19 Health Crisis: Between Institutional Activation and Normative...

Building a European Social Security System: Collaboration and Administrative Justice in the Posting of Workers in the European Union

Beyond the Western ‘Business and Human Rights’ Tunnel Vision