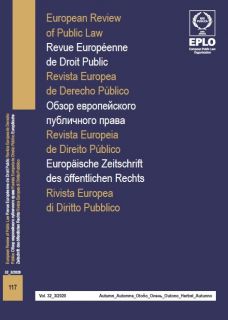 This ERPL issue starts by an article on the “augmented Constitution”: To the question of whether a “member state”, as a state of “reduced or shared sovereignty”, has a constitution of “reduced or shared supremacy”, the author of the first paper argues that the relativization of the national constitution does not diminish its regulatory content and significance, but leads to the phenomenon of an “augmented Constitution”, which is the result of a constitutional strategy that ensures the coexistence of a plurality of legal orders and of rules that claim, in a self-referential way, legal supremacy and priority of implementation in their field. Although this strategy includes some concessions in favor of EU law or the ECHR, in the vast majority of cases it results in an augmentation of the guarantee content of the Constitution and the strengthening of democracy, the rule of law and the protection of human rights.

The second article is concerned with the wide acceptance of the principle of the generality of the legislative power, the validity of which has not really been questioned. It has been claimed that the principle is a consequence of the democratic parliamentary system or that it exists because the Constitution does not restrict the domain of statutes. However, these arguments cannot hold in the face of the “principle of granted powers”, which is a positive principle adopted by Article 6/3 of the Constitution. In the Turkish legal system, the legislative power has a determined domain.

The third article of this ERPL issue deals with the principle for effective judicial protection, which the Court of Justice early confirmed as a general principle of EU law while at the same time the Court assumed the task of conferring to said precept the effectiveness and the proper content that the protection of the rights recognized by EU law demands. The article exposes the argumentative lines to which the Court has resorted to support the aforementioned fundamental right; secondly, it reveals the common legal bases of these case-law lines; and lastly, it intends to define the content of this right with an integrative interpretation.

In the section of Chronicles of Constitutional Law, the first one, coming from Austria, presents the discussion in 2019 and 2020 on different legislative amendments in the light of their constitutionality and on the amendment of the Austrian Constitutional Law itself. In particular, the social security agencies were reorganized and the Federal Constitutional Law was amended. The reorganization of the social security agencies, the prohibition of Islamic veiling in elementary schools, killing on request and inducement or participation in suicide as well as parliamentary committees caused vivid discussions in the case law of the Austrian Constitutional Law. Furthermore, with regard to the “Ibiza-Untersuchungsausschuss”, the Court found that the decision of the National Council’s committee of rules of procedure on the partial declaration of inadmissibility was illegal.

The chronicle on Slovak Constitutional Law firstly looks at the 2020 pandemic and its impact on the political and constitutional system in Slovakia. The second part analyzes the 2020 constitutional amendment, passed by the Parliament as part of the I. Matovič’s government manifesto promise to substantially overhaul the Slovak judicial system’s institutional design.

The following chronicle highlights the dynamic development of the constitutional legislation of Ukraine in 2019, maybe due to the holding of the next presidential and early parliamentary elections. In this context, the parliament amended the constitutional provisions on the consolidation of Ukraine’s European integration course, as well as adopted the Law “On Ensuring the Ukrainian as the State Language”. After the presidential and parliamentary elections, amendments to the Constitution of Ukraine 1996 on the immunity of people’s deputies of Ukraine, and the Electoral Code of Ukraine (the first in its history) were adopted.

In the section of Administrative Law, the first chronicle deals with the interesting developments which the Belgian administrative law is undergoing in 2019, an election year at European, federal and regional level. In this context, a declaration on the revision of the Constitution is adopted while the Brussels institutions adopted a legislative text aimed at establishing the existence of an Ombudsman in Brussels. As concerns case-law, among the important decisions handed down by all the supreme courts, three judgements relating to publication by means of posters have been issued by the Court of Cassation; two others are handed down by the General Assembly of the Council of State: the first on the link between the maintenance of interests in judicial review and in action for restorative compensation; the second on the subject of the notion of current interest, following a judgment handed down six months earlier by the ECtHR.

The last Administrative Law chronicle is devoted to an overview of the 2020 amendments of (i) the Portuguese Code of Administrative Procedure; and (ii) the Portuguese Nationality Law. In addition, the authors take a look at (i) one particular piece of legislation in the public procurement field; and (ii) several amendments made to the main piece of legislation in the environmental field, which ensured the transposition of several 2018 directives regarding waste management.

In the section of Jurisprudence, the chronicle coming from Portugal gives an overview of the Portuguese Constitutional Court case-law of 2019. In this year, the Court issued an important decision regarding the unconstitutionality of Articles 3 and 4 of Organic Law no. 4/2017, of 25 August 2017, which established a special procedure for access to telecommunications and internet data by intelligence officers. Criminal and Tax Law stood out as the main legal areas approached by the Portuguese Constitutional Court, with a relevant decision in Administrative Law also. There was also a Ruling on an a priori review of constitutionality of amendments made to the Law on Medically Assisted Reproduction in the aftermath of Ruling no. 225/2018 of the Constitutional Court, which considered some of its rules unconstitutional, namely regarding gestational surrogacy.

The review of an interesting selection of books coming from Austria, Slovakia and Ukraine follows while this ERPL issue concludes with the presentation of six books received by the EPLO Library.

E. Venizelos, From the Relativization of the Constitution to the “Augmented Constitution” [IN ENGLISH]

S. Taşdöğen / Y. B. Gülgeç, Is the Legislative Power General in the Turkish Constitutional System? [IN ENGLISH]

J. Agudo, Towards the Determination of the Content of the Right to an Effective Remedy in the European Union - Evolution and Constitutional Standards [IN ENGLISH]