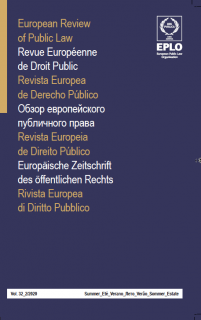 This ERPL issue starts by an article based on the speech delivered by Jean-François Gaudreault-DesBiens, Professor of Law and Vice-President, Strategic Planning and Communications, University of Montreal, on the occasion of the 2nd Lecture in honor of Giuliano Amato, held at the premises of the European Public Law Organization in Athens on 24 June 2019. This article outlines the main components of the constitutional framework governing Canada’s various sources of diversity, and highlights the limits of this framework. The picture of Canada that emerges is not one that is negative, but rather one that nuances the idealized image that the rest of the world often has of the country.

Then, the ERPL is honored to publish an article by Prokopios Pavlopoulos, Former President of the Hellenic Republic, Emeritus Professor of the National and Capodistrian University of Athens. The article gives an objective overview of the institutional and political ramifications of the “Gauweiler” and “Weiss” jurisprudence - and the corresponding juridprudential course from 2016 to 2020 - of the Federal Constitutional Court of Germany, which thus openly challenged - by contesting the binding nature of the CJEU judgments - the primacy of the European Law over National Law. The question strongly arises of what needs to be done, in order to deal promptly and appropriately with this turbulent situation related to the function of the European Legal Order.

The following article aims at exposing a transversal analysis of the mechanisms of mutual recognition established by European Law in the Financial and Banking sectors, as well as the latest developments on the European Banking Union in order to to show a number of regulative techniques that compound what is known as the European Administration.

Next, an article maintains that protection of human rights throughout the whole chain of the buildup of the renewables infrastructure – from land allocation to sourcing of the raw materials – is essential for achieving the EU climate goals and beyond may determine the ultimate success of the transition since a growing local resistance stalled their growth in a number of countries already. Specific reference is made to the renewables-assisting legal landscape in the Province of Ontario, the industrial heartland of Canada, as well as to the UN “Guiding Principles on Business and Human Rights: Implementing the United Nations ‘Protect, Respect and Remedy’ Framework”.

In the section of Chronicles of Constitutional Law, the first one, coming from Georgia, points out how important it is that parliamentary elections are transparent and all participants have equal treatment under the law. The legislation shall also ensure that the ruling party does not have legislative leverage to use the state’s administrative resources to gain an advantage in elections. That is why Georgia has switched to a proportional electoral system as a result of constitutional changes. Such a system ensures multi-party system, reduces the concentration of power in the hands of only one party and is an important step towards strengthening democracy.

The chronicle on Italian Constitutional Law presents the government crisis in the period thereby considered, which was resolved with the formation of a new government supported by the Five Stars Movement and the centre-left Democratic Party (PD), along with the leftist parliamentary group Free and Equal (LeU). The new cabinet is led by the Prime Minister himself, Giuseppe Conte. In the period considered, the Parliament approved a constitutional reform that reduces the number of parliamentarians, providing for a number of 400 deputies (instead of 630) and 200 elected senators (instead of 315). At the same time, other related constitutional revision initiatives were launched to increase constitutional guarantees and democratic representation, ensuring political and territorial pluralism.

The Constitutional Law chronicle coming from the Netherlands first examines the landmark judgment of the Supreme Court, which upheld the CO2 reduction order issued by the Court of Appeal of the Hague and other noteworthy judgments relating to the repatriation of the families of IS combatants and the repeal of the Advisory Referendum Act. Other developments presented in the chronicle refer to: the elections to the Provincial Councils which resulted in a new composition of the Senate; the European Parliament elections of May 2019 which saw the revival of the Dutch Labour Party and cast doubts on the future of the Spitzenkandidaten procedure; the Cabinet’s response to the recommendations of the State Commission on the Parliamentary System, etc.

In the section of Administrative Law, the first chronicle focuses on the fact that in Denmark climate interests have gained more and more awareness politically during the recent years. Most recently, Denmark adopted its first Climate Act that sets out to bind the whole Danish nation in fighting climate change. In light of this legislative trend, this chronicle examines the recent developments in Danish Administrative law regarding the climate interests.

The second chronicle describes the main administrative reforms in Italy in 2019. Firstly, the most relevant measures contained in the so-called “Law Spazzacorrotti” are examined. Secondly, the chronicle analyzes the novelties introduced by the Decree-Law on special powers inherent in broadband electronic communications services based on 5G technology, and on the cybersecurity area. Thirdly, the Decree on public contracts, called “Sblocca cantieri” is analyzed. Fourthly, the chronicle focuses on the legis­lative interventions concerning the concreteness of the actions of public administrations and the prevention of absenteeism, as well as the decree-law on culture. Subsequently, tax interventions and the “Milleproroghe” Decree are analyzed. Finally, the chronicle examines the main measures contained in the Budget Law for 2020.

The last Administrative Law chronicle is devoted to actual amendments of the administrative law occurred in Russia in the field of state antimonopoly control and in public procurement in 2019. In the competition area are analyzed amendments to the federal law “On competition defence”. Also the main novelties and changes to the regulations governing the contract system in procurement are analyzed.

In the section of Jurisprudence, the chronicle on French Constitutional Jurisprudence analyzes the decisions of the Constitutional Council that were rendered in 2018. Electoral litigation was, for its part, provided, this being a year following an electoral year. The Council also continued examining emblematic laws of the majority elected in 2017. It has furthermore faced the consequences of the state of emergency. With regard finally to system relationships, the Council extended to European regulations its jurisprudence on “digital economy” initially applicable to Euro­pean directives.

The review of an interesting selection of books coming from Italy follows.

This ERPL issue concludes with the presentation of seven books received by the EPLO Library.

J.-F. Gaudreault-DesBiens, Canada’s Kaleidoscopic Diversity and Constitutional Law: A Solution in Search of a Problem, or All that Glitters Is Not Gold?  A Brief History of a Work in Progress [IN ENGLISH]

P. Pavlopoulos, An Indirect Yet Clear Challenge to the Primacy of the European Law over National Law Posed by the Jurisprudence of the Federal Constitutional Court of Germany  [IN ENGLISH]

H. Iglesias Sevillano, Financial and Banking Sectors in European Law: From Mutual Recognition and Cooperation Mechanisms to the Country-of-Origin Rule and Exhaustive Harmonization [IN ENGLISH]

V. Smirnov, Development of the Constitution in the Russian Federation: Actual Problems [IN ENGLISH]

I. Kalandadze, Georgia  [IN ENGLISH]

M.J. Vetzo, The Netherlands  [IN ENGLISH]

Canada’s Kaleidoscopic Diversity and Constitutional Law: A Solution in Search of a Problem, or All that Glitters Is Not Gold? A Brief History of a...

An Indirect Yet Clear Challenge to the Primacy of the European Law over National Law Posed by the Jurisprudence of the Federal Constitutional Court...

Financial and Banking Sectors in European Law: From Mutual Recognition and Cooperation Mechanisms to the Country-of-Origin Rule and Exhaustive...

Development of the Constitution in the Russian Federation: Actual Problems

"Local" Bodies of Social Participation in the Greek Educational System

Public Hearings in Slovakia and in the Czech Republic