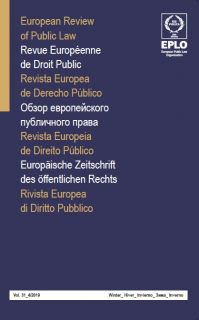 This ERPL issue has the honor and pleasure to publish an article based on a speech given by H.E. the President of the Hellenic Republic Prof. Prokopios Pavlopoulos at Trinity College, Dublin University, where he received an honorary doctorate from the Faculty of Law. The article titled “Verteidigen wir das Internationale Recht!” highlights the importance of International Law in safeguarding international cooperation, but also democracy, equality and harmony within states. The author points however to the need for adequate protection mechanisms, as it is the most expedient institutional and political channel for peaceful co-existence between states and peoples and the resolution of disputes through institutionalized processes and suggests that the community of international law experts must commit itself to a campaign to protect the authority and standing of International Law. The second article analyzes the relationship between audit and judicial accountability. The differences between the work of the auditor and that of the judicial body consist in the different angle from which they approach the matter before them, and in the effects of their final judgments. The article builds on the landmark case of Ismeri Europa v Court of Auditors before the Court of Justice to reflect on the legal nature of the European Court of Auditors’ reports and the conditions under which the auditor can publicly criticize third parties. The third article in this issue deals with the participation of interest groups in the Commission’s decision-making process which is a vital part of EU policy-making. However, the problem of unequal representation of stakeholders during the impact assessment process raises the issue of whether this undermines the Commission’s decision-making process, thus justifying the Commission to refuse access to impact assessment documents (Article 4(3), Regulation No 1049/2001). In ClientEarth (C-57/16) the Court of Justice rejected this argument, however this article argues that in the absence of countervailing information, overrepresentation of stakeholders is capable of compromising the Commission’s decision-making process and the Commission may therefore justifiably prevent overrepresented stakeholders from accessing impact assessment documents. Last but not least, the fourth article maintains that the economic crisis caused by COVID-19 is a crisis that has highlighted the limits of the European project as a whole. It is the first time in the history of European construction that the principle of the free movement of persons has been affected in its human and economic substance and that the integration process seems as fragile as the return of nationalism becomes inevitable while some national authorities are challenging the foundations of Union law, such as primacy. It is precisely in this same context that the ECB has shown realism in proposing measures to save the European project as a whole. This article sets out these observations of a European construction which is developing through its own paradoxes and which has to face not its “raison d’être” but a disease, COVID-19.

In the section of Constitutional Law Chronicles, the first contribution comes from Greece and examines the issue of the exercise of voting rights for out-of-country citizens, revisited by Greece following the recent wave of migration, mostly within Europe, as a result of the economic recession and the adoption of strict fiscal measures. Recognising the impact that the large number of diaspora could have on the overall electoral result of national elections, restrictions were placed on out-of-country citizens eligible to exercise their voting rights from the host country. The effects to the political discourse are highly anticipated.

The chronicle on Hungarian Constitutional Law 2019 focuses on the Seventh Amendment placed in the Fundamental Law in 2018, which remains a key topic in constitutional jurisprudence regarding the relationship of EU law and national constitutional law. The Eighth Amendment of the Hungarian Fundamental Law was also adopted and certain provisions of the Act on the Constitutional Court have been amended on several key points. In addition, a few interesting developments before the ECtHR have greatly contributed to defining the role and status of the HCC in protecting fundamental rights in the European multilevel framework created for this purpose.

Next, the chronicle on Polish Constitutional Law on the year 2019 refers to developments such as the dispute over the status of the Constitutional Tribunal, the new Disciplinary Chamber of the Supreme Court, the National Council of Judiciary (NCJ) and the State Electoral Commission, which put the Polish constitutional democracy to the test and had an important impact on constitutional practice.

The chronicle on Romanian Constitutional Law presents significant developments in the constitutional field in Romania in 2018, a year characterized, in particular, by debates on the reform of justice, criminal law, the penitentiary system, with resonances not only nationally, but also internationally. Within this framework, benchmarks are presented from the case-law of the Constitutional Court, regarding the main legislative amendments in the mentioned fields, as well as regarding a series of legal disputes of constitutional nature that have involved institutional actors from the sphere of all three powers of the State.

Last but not least in the section on Constitutional Law, the Spanish chronicle of Constitutional Law revises the most relevant political-constitutional events in the year 2018, such as the celebration of the 40th anniversary of the promulgation of the 1978 Constitution, with which Spain entered the constitutional path in a definitive and irreversible way; the approval by the Congress of Deputies of the first motion of censure; the first draft of a constitutional reform, in this case to modify Articles 71.3 and 102.1, regarding the suppression of legislative immunity for Deputies, Senators, the President and other members of the Government; the elections to the Parliament of Andalusia. In addition, decision STC 31/2018, of April 10, which declares constitutional a substantial equality in the separate educational opportunities, and on the other hand, decision STC 58/2018, of June 4, on the right to be forgotten are noted.

The next chronicle comes from Hungary, where the year 2019 was once again marked by the redesigning of the organization of administrative justice. The government came up with an again novel direction for administrative justice at the end of the year - the third model within three years. The regulations of the Eighth Amendment to the Fundamental Law of Hungary are mentioned here. Legislation and jurisprudence furthermore mostly touched on the novelties of the new Codes on administrative procedure and judicial review having entered into force in 2018. Some interesting cases are reported, connected to the dissolution of autonomous environmental administrative organs and the transfer of their competences to other organs of state administration.

In this same section, the chronicle coming from Poland first informs the reader about the Conference of the Chairs of Law and Administrative Procedure which was held from 25 to 26 June 2018 in Warsaw. The year 2018 also introduced an amendment to the Law on Higher Education, which is important for the scientific community, charged with ensuring an efficient management of higher education institutions and a better development of science. Some decisions of the administrative courts concerning the application of administrative law are also presented in the chronicle.

The chronicle on Romanian Administrative Law analyzes the Administrative Code, which has been finally adopted, entered into force, has already passed the constitutionality test and is now under the practical test of everyday application. The first section of the chronicle refers to the Code’s main novelties and some of the provisions open to critique. In the second section of the chronicle, the relevant jurisprudence of the Constitutional Court of Romania is discussed. The third section draws attention on the European judicial dialogue in administrative matters, involving cases before the ECtHR and the CJEU on the same issue of administrative automatic confiscation of undeclared cash sums carried when entering/exiting the European Union.

The last chronicle in this section covers developments in Serbian Administrative Law in 2019, which the author considers particularly relevant from the standpoint of the obligations of the Republic of Serbia on its path towards EU membership. The author reflects on the marking of the 150th anniversary of administrative dispute and administrative judiciary in Serbia. Historical developments documented in a collection of papers published as a result of collaboration between the Administrative Court of the Republic of Serbia and the University of Belgrade, Faculty of Law, represent a valuable point of reference against which the forthcoming reform of the administrative judiciary, envisaged by the newly adopted National Strategy for Judicial Reform for the period 2019-2024, could be assessed. The second part is focused on the reform of the strategic and legislative frameworks of the public procurement system in Serbia - another fundamental pillar of an efficient and functional public administration.

This ERPL issue continues with the presentation of four books received by the EPLO Library whereas an Analytical Table of all papers published in all four ERPL issues of the year 2019 concludes the issue.

N. Milionis, The Relationship between Financial and Judicial Accountability in the European Union [IN ENGLISH]

C. Petrucci, Unequal Representation of Stakeholders in the Commission’s Impact Assessment Process and the Protection of the Decision-making Process [IN ENGLISH]

C. A. Vassilopoulos, COVID-19, Legal Constraints, Questioning and Paradoxes within the EU: Some Reflections [IN ENGLISH]

A. I. Pottakis, Greece [IN ENGLISH]

The Relationship between Financial and Judicial Accountability in the European Union

COVID-19, Legal Constraints, Questioning and Paradoxes within the EU: Some Reflections