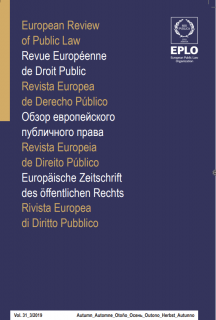 The first article in this ERPL issue outlines the basic principles of American campaign finance law up to 2010 and the changes that resulted from Citizens United. Furthermore, the article describes the effects of these changes and the criticism that has been raised. The second article examines the Aarhus Convention provisions on access to environmental justice, the access requirements to procedures before the CJEU and the Aarhus Regulation, which was approved to implement the Aarhus Convention to EU’s institutions. The third article of this ERPL issue is devoted to the criminal-law protection of the natural habitat in Italy and maintains that a general revision of the system of criminal sanctions is necessary, also after the amendment made in 2011, that introduced in the Criminal Code a provision related to the crime of destruction or deterioration of the natural habitat. Finally, the fourth article deals with EU state aid law (Art. 107 TFEU) aimed at preventing member states from using public funds for the benefit of certain private enterprises. This paper goes beyond the scope of recent cases regarding tax schemes used by Apple, Google, Amazon or McDonald’s as well as mere practical issues regarding the state aid status of rulings, tax treaties, international tax relief or hybrid mismatches and aims to define the pillars of a state aid framework that offers a clear delineation between state sovereignty and single market protection on the example of (international) fiscal state aid.

In 2018, the introduction of a constitutional complaint in Ukraine caused a number of problems that are vividly discussed by both scientists and practitioners. An analysis of this issue, relevant both from a scientific and a practical point of view, is carried out in the Constitutional Law chronicle coming from Ukraine.

Next, in the section on Administrative Law, the first chronicle analyzes two principal rules existing in Irish Law as concerns the process of judicial review (i) First a body will be amenable either where it has been established with the approval of the legislature for the purpose of carrying out a function on behalf of the state. (ii) Second, functions performed by a public body but in the context of a private contract between the individual and a public institution, are excluded from judicial review.

The chronicle from Belgium analyzes the various interesting developments Belgian administrative law underwent in 2018: for instance, legislation in the Flemish Region on the organization of local government, but also on the relationship between the citizen and the administration; establishment in the Walloon Region of a mechanism of popular consultation and legislation in the fields of expropriation, of heritage, of supervision of local authorities and transparency within the subsidiaries of intercommunal entities; the specific ways of communal management and of intercommunal cooperation, and the new administrative and pecuniary status for the agents of the Brussels regional services. For its part, justice gives various lessons, such as the case of the Constitutional Court on extracontractual civil liability of the administration and licensing of a public sector contract agent, or the case of the Court of Cassation on the use of languages in the so-called “peripheral” communes and other cases of the Council of State or of the Brussels Court of Appeal.

In the chronicle coming from Turkey the summary procedure under Turkish Administrative Law that came into force with Law No. 6545 on the Amendment of the Turkish Criminal Law and Other Laws in 2014, is introduced. In doing so, the most debated issues on the summary procedures are highlighted.

In the section of Jurisprudence, an overview of the Portuguese Constitutional Court case law of 2018 is given. In this year, the Court issued an important decision regarding the unconstitutionality of some aspects of the Law on Medically Assisted Reproduction, especially those related with surrogate motherhood. As usual, Criminal and Tax Law stood out as the main legal areas approached by the Portuguese Constitutional Court, with a relevant decision in Family Law also. This is reflected in the decisions summarized in the chronicle.

This ERPL issue continues with a review of books coming from Austria, Slovakia and Ukraine.

Finally, a presentation of books received by the EPLO Library concludes the issue.

J.A. Jensen, The State of Political Campaign Finance Regulation in the United States after Citizens United - How Can the Effects of Citizens United Be Addressed? [IN ENGLISH]

G. Martínez Jiménez, Access to Environmental Justice before the CJEU - Application of the Aarhus Convention to EU Institutions [IN ENGLISH]

S. Florio, Community Law and the Criminal-Law Protection of Natural Habitats in Italy [IN ITALIAN]

Š. Jozipović, The Application of EU State Aid Law on International Tax Law - The Impact of Trade- and Competition Law on National Sovereignty in Fiscal Matters [IN ENGLISH]