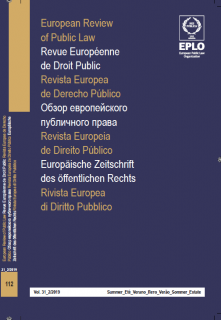 This ERPL issue starts by the text of the speech that United States Senator Bob Menendez held on the occasion of the 15th Manuel Chrysoloras Lecture, which took place at the Plaka, Athens, premises of the European Public Law Organization on April 22, 2019. US Senator Bob Menendez’s speech was on the topical issue of Security and Prosperity in the Eastern Mediterranean, which is presented in the text published in this issue.

The first article deals with the issue of the ethical standards and integrity, whose importance is primary for the proper functioning of international organizations. The judge synthesizes grounding on the legally binding standard and encouraging the development of the international civil service, in a way more ‘ethical’ than merely avoiding illegality in this relationship. The author standing in a personal capacity presents some views on the issue.

In the third article it is maintained that the task of implementing the fair distribution of resources remains within the remit of politics, within the framework of the complexity of public interests, a process however which must take into account the essential protection of fundamental rights.

Last but not least in the section of Articles, the next paper aims to question the clash between the wonders of technology and scientific discoveries on the one hand and the risks for the rights of privacy of individuals on the other hand. To this end, the author adopts the image of Jeremy Bentham’s Panopticon, in order to portray the contemporary Digital Age (and its digital prisons).

In the section of Chronicles of Constitutional Law, the first one, coming from Georgia, deals with the country’s Constitution, which is a major pillar based on which Georgia has been trying to develop a model of democratic governance, that should ensure the protection of fundamental rights and freedoms. As a result of the significant changes to the Constitution over the years, Georgia gradually moved from a presidential republic to a parliamentary republic. These changes moreover indicate Georgia’s desire to be a European democratic state, whose legislation and state structure are focused on strengthening democratic principles.

The chronicle on Italian Constitutional Law informs the reader that the 2018 elections for the renewal of Parliament resulted in a tri-polarization of the Italian politics. The electoral results led to the resignation of Matteo Renzi whereas opened up a long institutional and political crisis, in which the Head of State played a leading role, by entrusting the task of forming a new government to Giuseppe Conte, appointed to lead a government between M5S and the Lega.

The Constitutional Law chronicle coming from the Netherlands deals with issues such as the judgment in the Urgenda Case, issued by the Court of Appeal, judgments relating to the question of which norms of international law rank supreme over conflicting domestic provisions, the separation of state and church and Brexit. From a legislative perspective, the repeal of the Advisory Referendum Act and the referendum on the Intelligence and Security Services Act stand out.

The last chronicle in this section comes from Russia, where in 2018 the government announced the highly unpopular pension reform. At the same time, the constitutional right to free distribution of information was again in the spotlight. Various issues of federalism and local self-government were addressed. The year was mainly marked by the new stage of judicial reform. Finally, the most significant Russian cases decided by the ECtHR are reviewed in the chronicle.

The second chronicle describes the main administrative reforms in Italy in 2018: the most relevant measures contained in the so-called “Genova” Decree; the novelties intoruced by the Legislative Decree for the harmonization with the European GDPR; the Decree on immigration and security; the Legislative Decree amending the third sector Code, and other reforms. Finally, the chronicle examines the main measures contained in the Budget Law for 2019.

The third chronicle discusses the developments in Dutch administrative law in the last period during which the legal literature can be organized around: digitization, de-constitutionalization and the responsive rule of law. Moreover, two cases of the Court of Justice on the administrative law discourse and in practice and a number of domestic developments are analyzed.

The last Administrative Law chronicle is devoted to actual amendments of the administrative law occurred in Russia in the field of state antimonopoly control and in public and corporate procurement in 2018.

In the section of Jurisprudence, the chronicle on French Constitutional Jurisprudence analyzes the decisions of the Constitutional Council that were rendered in 2017. Some emblematic decisions in the context of the PQC litigation have been issued, such as on secularism overseas or the organization of speaking time during election campaigns. The fight against terrorism and the state of emergency regime play an important role in the constitutional litigation.

This ERPL issue concludes with the review of an interesting selection of books coming from Denmark and Italy and with the presentation of four books received by the EPLO Library.

A. Puzzanghera, Public Administration and Fundamental Rights in Italy

I. Kalandadze, Georgia [IN ENGLISH]

A. Buijze, The Netherlands [IN ENGLISH]

Google it! - The EU Approach to Technology and the Risk for the Rights of Privacy of its Citizens

Reflections on European Security and the Co-operation through the EU: Sweden