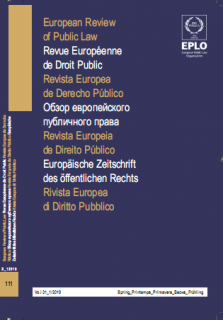 In this issue of the ERPL are published the proceedings of the annual conference of the EGPL organised from the 7th to the 9th of September 2018 at the EPLO premises in Legraina (Greece), on “BREXIT”.

As the Brexit process is still ongoing, the Editors wish to note that the papers included in this ERPL issue are either based on the presentation made by the authors within the framework of the EGPL Annual Reunion 2018 or updated until the submission of the final proofs.

Under the heading “EU and UK Constitutional Issues; Withdraw from the Union with and without Agreement; State of the Negotiations between EU and UK; Remain after the Failure of the Negotiations; Lessons to Take from Brexit”, the first paper gives an overview of the main Brexit issues. More in particular the EU legal-institutional aspects with regard to the course of the negotiations, the present state of affairs as well as the future perspectives of the British departure are highlighted. The second paper under this heading analyzes the judicial review decision on matters of constitutional law related to the UK’s withdrawal from the EU, issued by the High Court of Justice on November 3, 2016, ratified by the UK Supreme Court on January 24, 2017, both referred to the so-called “Brexit case”. Last but not least under this heading, a paper analyzes the consequences of Brexit on the EU constitutional nature and on its Founding Treaties.

The next heading is titled “The Impact of National Referenda and Secession of States in the EU”. A paper under this heading examines the significance and use of referendums (and especially the EU withdrawal referendum in 2016) in the constitution, by setting referendums in the context of developments in the constitution more generally. The following paper under this heading proceeds to a static and dynamic analysis of Brexit. The calculation of the Brexit effects is however complicated under both analyses given the legal and political chaos into which the Brexit process finds itself as well as the fact that, against the background of the economic, political and social histories of Europe and the UK, forged in the same economic basin, Europe, it is difficult to define the consequences.

Under the heading “The Impact of Brexit into the Internal Policies and in External Policy, especially the Area of Freedom, Security and Justice and EU Foreign, Security and Defence Policies”, the first paper, based on the working hypothesis that a Withdrawal Agreement will be concluded between the EU and the UK, examines the draft Agreement and Political Declaration as agreed between both sides in November 2018 and highlights some legal features that appear particularly innovative, in three areas: The protection of citizens’ rights in the Withdrawal Agreement; Cooperation on internal security within the envisaged future relationship; and judicial protection of rights and settlement of disputes. The next paper under this heading studies the two dimensions of the impact of Brexit on the external action of the European Union: in the relationships between the UK-third country and the EU and in the relationship between the EU and the third countries and in particular in what concerns the change in the treaty relations. The final paper under this heading maintains that the EU regulatory framework provides for a favorable regime in relation to trade in services within its territory, including financial services and that the UK financial system and UK financial law will continue both to influence and be influenced and shaped by international regulatory developments with regard to safeguarding financial stability and attaining other policy objectives concerning financial regulation, supervision and oversight.

In the “Conclusions” the author refers to the difficulty in resolving many issues in the Withdrawal Agreement as well as to the situation in politics, which has become even more complicated due to the fact that the date of withdrawal is not certain anymore. It is clear that Brexit will have systemic consequences, but what Brexit has illustrated in all its risks and all its absurdities is the rise of populism, of nationalism and of xenophobia.

The second part of this ERPL issue includes three general reports which try to answer a Questionnaire on “Member States’ Constitutional Rules on the Withdrawal from the European Union”, included in the issue. The first report is coming from Bulgaria, where there are no specific provisions in the legislation as concerns the country’s withdrawal from the EU. As concerns Germany, from which the second report comes, scholars in constitutional law are divided on the subject. There are convincing arguments that an exit would require an amendment of the Basic Law abolishing the goal to strive for a united Europe. The third report comes from Spain and studies the legal framework that would apply in case the country were to hypothetically decide to withdraw from the EU. It delves into the constitutional foundations of such a hypothetical withdrawal, analyzes the procedyre to be followed when denunciating an international treaty and focuses on the possibility of conducting a referendum as well as its legal effects and controversies while it finally outlines the issue of public opinion on the withdrawal from the EU.

In the third part of this ERPL issue, a contribution proposes to investigate the use of “smart referenda” as one of the avenues to work toward creating a genuine EU-centered voter mentality by actively engaging European voters in the European Process.

The next part includes papers presented or prepared within the framework of Workshops that took place during the Conference.

In the context of the Workshop on “External Relations of the European Union and the United Kingdom after Brexit”, the first paper refers to the fact that, after Brexit, the UK will have to negotiate numerous international treaties to replace the agreements previously concluded by the EU and also refers to the case of the UK being able to conclude agreements with its main trade partnerns before its exit from the Union as well as of the UK managing to conclude new trade agreements with third countries, which however would be unlikely to ameliorate its position in international relations. The second and final paper under this Workshop, gives an overview of the record of EU-Ukraine political and economic relations and focuses on the UK’s protagonistic role in Ukraine’s development. It finally confirms that the Brexit projections woud weigh also with Ukraine’s progress.

In the context of the Young Researchers Workshop, the first paper examines the concept of constitutional identity which is considered by the scientific public opinion as a highlighted issue and appears in a different approach in the Anglo-Saxon legal systems and in the supranational system of European integration. Nevertheless, constitutional identity is a bridge between the Member States and the EU. The second paper deals with the consent mechanism, a mechanism set up to give the steer of personal data control to the data subjects. The issue is dealt with in the light of the developments in the field of Artificial Intelligence and Robotics and maintains that clarifying data processing purposes of Social Robots shall be one of the initial tasks of the data controllers.

A. R. Brewer-Carías, The “Brexit” Case before the Constitutional Judges of the United Kingdom: Comments regarding the Decision of the High Court of Justice of November 3, 2016, Confirmed by the Supreme Court in Decision Dated January 24, 2017 [IN ENGLISH]

A. M. Guerra Martins, The Impact of Brexit on the EU Constitutional Nature and on the EU Founding Treaties [IN ENGLISH]

D. Feldman / V. Fikfak, The Constitutional Impact of National Referendums and the UK’s Secession from the EU [IN ENGLISH]

E. Karakaş, Brexit and the Budget of Europe [IN FRENCH]

C. Ladenburger, Selected Legal Issues Arising in the Brexit Negotiations, in particular concerning the Protection of Citizens’ Rights and the Area of Freedom, Security and Justice [IN ENGLISH]

E. Neframi, The External Action of the European Union in the light of Brexit [IN FRENCH]

Ch.V. Gortsos, The Impact of Brexit on Financial Services [IN ENGLISH]

R. Stefanov, Member States’ Constitutional Rules on the Withdrawal from the European Union: Bulgaria [IN ENGLISH]

Th. Gross, Does the Basic Law Allow Germany to Leave the European Union? [IN ENGLISH]

I. Maravall Buckwalter, Member States’ Constitutional Rules on the Withdrawal from the European Union: Spain[IN ENGLISH]

Annex, Member States’ Constitutional Rules on the Withdrawal from the European Union [IN ENGLISH AND FRENCH]

O. Zaichuk / Y. Zaichuk, Brexit - An Opportunity for Engagement? A Case for Smart Referenda [IN ENGLISH]

M. Gatti, External Relations of the European Union and the United Kingdom after Brexit [IN ENGLISH]

A. Sanchenko, EU-Ukraine External Relations and Brexit Projections [IN ENGLISH]

G. Gültekin Várkonyi, Consent Mechanism in the Life with Social Robots [IN ENGLISH]

Information [IN ENGLISH AND FRENCH

‘Brexit’: State of Play and Perspectives

The “Brexit” Case before the Constitutional Judges of the United Kingdom: Comments regarding the Decision of the High Court of Justice of November...

Brexit and the Budget of Europe

Selected Legal Issues Arising in the Brexit Negotiations, in particular concerning the Protection of Citizens’ Rights and the Area of Freedom,...

The Impact of Brexit on Financial Services

Member States’ Constitutional Rules on the Withdrawal from the European Union: Bulgaria

Does the Basic Law Allow Germany to Leave the European Union?

Member States’ Constitutional Rules on the Withdrawal from the European Union: Spain

Member States’ Constitutional Rules on the Withdrawal from the European Union

Brexit - An Opportunity for Engagement? A Case for Smart Referenda

Consent Mechanism in the Life with Social Robots