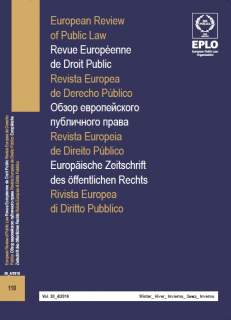 This ERPL issue starts by an article aimed at giving an overview for an international audience of the results of two acts passed in 2007, the French Enforceable right to housing Act (DALO) and the Catalan Right to Housing Act, as both are good examples of legal innovations regarding land use and housing at the beginning of the 21st century. The second article deals with the topical issue of refugees in Europe and more in particular with the individual rights and state obligations laid down in German law. It is therefore the network of refugees’ legal protection which is unfolded in this study. The third article focuses on the principal requirement of most whistleblower protection provisions that the disclosures be made “in good faith” and “on reasonable grounds” and it reflects on the tendency that the requirement of “good faith” should be omitted in favor of a “public interest” requirement, on the basis that a disclosure which is made in the public interest should not be unprotected just because it is made in bad faith. In the final article in this ERPL issue, voter volatility across the EU since the first direct elections to the European Parliament is investigated so that it is identified whether and to what extent a distinct European electorate is slowly emerging.

In the section of Chronicles, the first contribution comes from Germany and presents the main developments in the Constitutional Law of the country in 2017: the German Basic Law was amended twice  in order to introduce financial sanctions against unconstitutional parties and to reform the financial equalization between the federal states; the outcome of the federal elections of September 2017 is also examined. Finally, an overview of the most important decisions of the Federal Constitutional Court is given.

The chronicle on Hungarian Constitutional Law mainly focuses on the adoption of the Seventh Amendment of the Hungarian Fundamental Law, which was adopted by the newly formed National Assembly on April 8, 2018, as the Amendment contains a number of provisions that can be interpreted in response to today’s European challenges for Hungary. These provisions are thoroughly examined.

Next, the chronicle from the Republic of Latvia is divided into two parts detailing developments on the Constitutional Law of the country in 2016 and 2017. In the first part, the chronicle analyzes developments on areas such as the abolition of the immunity of the members of Parliament in administrative proceedings, the right of the Saeima deputies to abstain from voting, the repercusions of the health condition of the State President, and the necessity to restrict wearing clothes that cover the face in public areas. In the second part, the jurisprudence of the Constitutional Court on the so-called judge salary case is examined whereas the theory and practice of the separate opinion of a judge, the “decided claim” and the first decision to refer to the CJEU for a prelimiary ruling are analyzed.

Last but not least in this section on Constitutional Law, the Spanish chronicle focuses mainly on the analysis of the attempt of breach of the 1978 constitutional agreement occurred in Catalonia and the legislation and constitutional developments in this regard. Furthermore, the Constitutional Court Judgements SSTC 114/2017 and 124/2017 that declare the constitutionality of the analyzed laws are examined.

Next, in the section on Administrative Law, the first chronicle refers to the decisions of the Federal Administrative Court which show that in the reference period again the building law and the planning law become more important and detailed. Other fields that acquire increasing significance in the country are the environmental law, the Freedom of Information Act, and the asylum law.

The second chronicle in this field provides an overview on the developments in Finnish Administrative Law in 2018: developments as concerns the Supreme Administrative Court, which celebrated its centennial, will occur when the new Act on Judicial Procedure in Administrative Matters will be approved by the Parliament; legislation on early childhood education and care, transport services and data protection; special review of linguistic rights. Finally, the SOTE reform is still in progress in Finland.

The next chronicle comes from Greece and informs the reader about developments in the field of Administrative Law in the country in the period between 2016 and 2017, focusing on Law 4446/2016, which brought about changes in administrative procedures. The decisions of the Plenary of the Council of State 217/2016 annulling environmental disputes and 95/2017 on televisions licenses are also examined.

The next chronicle comes from Hungary, where the year 2018 was marked by the elections of April 2018 and by successive organizational reforms, connected to the structure and functioning of the new government and to the governmental administrative system as well as to the establishment of fully separated administrative courts. The elections played an important role also as concerns the jurisprudence of the higher judicial fora and the first experiences with the new administrative court procedure act.

The chronicle on Romanian Administrative Law mainly analyzes the adoption of Prevention Law, which aimed at reducing the unnecessary sanctioning of contraventions, but it did so in the administrative jurisprudence. It refers to the decisions of general effect delivered by the Constitutional Court, the High Court of Cassation and Justice and the Court of Justice of the European Union (on a preliminary reference by a Romanian Court).

The last chronicle in this section comes from Spain where the year 2018 was “politically” conditioned by the extension in time of the effects derived from the declaration of independence of Catalonia, the approval of a motion of censure and the worrying emergence of a political option that can be placed on the extreme right of the Spanish ideological arc. The chronicle focuses on Organic Law 3/2018, of December 5, on the Protection of Personal Data and the Guarantee of Digital Rights and on (ordinary) Law 9/2018, of December 5, on environmental matters.

This ERPL issue continues with the presentation of five books received by the EPLO Library whereas an Analytical Table of all papers published in all four ERPL issues of the year 2018 concludes the issue.

C. Mialot / J. Ponce, Ten Years of the French DALO and the Catalan Right to Housing Act: European Innovation in the Fields of Land Use Planning and Housing [IN ENGLISH]

U. Karpen, Asylum and Refugees - Law in Germany and Europe: Recent Developments [IN ENGLISH]

M. Stylianidou, Whistleblowing: “In Good Faith” or “In the Public Interest”? [IN ENGLISH]

D. M. Viola, Towards a Distinct European Electorate?: An Account of Voter Volatility across the European Union [IN ENGLISH]

A. I. Pottakis, Greece [IN ENGLISH]

Ten Years of the French DALO and the Catalan Right to Housing Act: European Innovation in the Fields of Land Use Planning and Housing

Asylum and Refugees - Law in Germany and Europe: Recent Developments

Whistleblowing: “In Good Faith” or “In the Public Interest”?

Towards a Distinct European Electorate?: An Account of Voter Volatility across the European Union