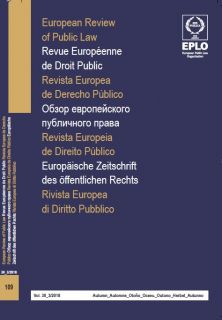 This ERPL issue starts by an article based on the speech that Professor Dr. P. M. Huber delivered on the occasion of the 1st Giuliano Amato Lecture, organized at the EPLO premises on April 27, 2018. As the European Monetary Union, the ESM and ECB have been a key issue in the Bundesverfassungsgericht’s jurisprudence over the last decade, the paper maintains that democratic legitimation has to be put into effect primarily through the Bundestag. The reliable acceptance of the measures in question would probably not be possible without the BVerfG’s role as guardian of the democratic principle.

Equally interesting articles follow in this ERPL issue. The first article focuses on administrative courts in Europe by examining the subject in three themes: First, a retrospective; second, considering the current trends in Europe; and third, considering the balance between judicial independence and accountability. The second article provides a comparative analysis of the Community experiences of the European Union and of the Andean Community with a particular emphasis on demonstrating how the former has strongly influenced the latter. The third and final article in this ERPL issue sheds light on Brexit as a crisis of representative democracy in Britain. In this article the author tried to show how a path to Brexit started being charted since 1997 and reads Miller as an effort to restore the role of Parliament as a deliberative forum in a context of a dynamically evolving direct relationship between the People and the executive power.

In the section of Chronicles of Constitutional Law, the first one, coming from Austria, presents the main novelties that characterized Austrian Constitutional Law in 2017 and 2018, such as, for instance, the (partial) realization of the long-planned project to untangle the complex system of competences between the Federation and the Länder, amendments to the Constitution regarding the education system, or landmark decisions of the Constitutional Court, such as the one on the rights of intersexual persons concerning sex entries in the civil registry forms and in identity documents.

The second chronicle in this section firstly looks at an interplay between formal and informal accountability mechanisms in the Slovak political system by reflecting the events surrounding the 2018 murder of investigative journalist J. Kuciak and his fiancée whereas in the second part the chronicle summarizes recent developments at the Constitutional Court.

Next, in the section on Administrative Law, the first chronicle examines the significant changes occurred in the field in 2017 in Belgium: A federated government was overthrown and replaced during its term of office for the first time since the creation of regions and communities, the municipalities of Belgium are given a tool of administrative policing in the fight against terrorism, and the transposition of European directives on public procurement contracts and concessions continues. Furthermore, important decisions of the Council of State and of the Court of Cassation are examined.

The next Administrative Law chronicle is focused on the current developments of administrative law in Slovakia, mainly in areas undergoing quick changes such as: public procurement, electoral legislation and land registry system. It also provides insight into those cases of the Administrative Division of the Supreme Court of the Slovak Republic connected with the retirement entitlement, the revision of appeal’s legality, the free access to information and other most frequented areas.

The chronicle coming from Turkey briefly introduces the new scheme of the executive branch under the April 16, 2017 amendments to the Constitution of 1982, through which a departure from the parliamentary system towards the presidential system has started.

The final Administrative Law chronicle comes from Ukraine and highlights the importance of public financial control in preventing and terminating offenses in the financial sphere. The chronicle maintains that the low effectiveness of public financial control, due to the lack of a generalized legal model and the unified approach to understanding the directions of its further development, does not allow to perfectly improve the current legislation in this area.

In the section of Jurisprudence, the Chronicle on the Portuguese Constitutional Court case law of 2017 summarizes fourteen decisions of the Court, on the main legal areas approached by it, that is, Criminal, Tax and Administrative Law.

This ERPL issue continues with the review of an interesting selection of books coming from Austria and appeared between November 2017 and October 2018.

The Bundesverfassungsgericht’s Approach to Monetary Union, ESM and ECB