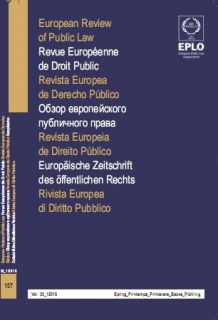 In this issue of the ERPL are published the proceedings of the annual conference of the EGPL organised from the 8th to the 10th of September 2017 at the EPLO premises in Legraina (Greece), on the subject “Freedom of Expression: Limitations and Prospects”.

Under the heading “General Introduction: Protecting Freedom of Expression in the 21st Century: Same Values, Different Challenges”, the first paper tries to demonstrate the complex and ambiguous situation with regard to the freedom of expression; the freedom of expression is a fundamental right but at the same time it remains an ambiguous freedom. It maintains that the freedom of expression, constitutive of the democratic power itself in its nature and functions, is at the same time a political right and a civil right spreading out in the public and in the private sphere. The paper highlights thus the potential ambiguities and weaknesses of a legal engineering which tries to erect the fundamental rights against the State power. The second paper under this heading maintains that in contemporary societies, which are faced with new challenges that lead to rethinking the relations between the individual rights and public order, what is at stake is the linkage between the rights of the individuals as citizen, the rights of the individuals as member of a community and the requirements related to the general interest. Under this heading, a paper based on an intervention made during the Conference is also included dealing with the issue of extraterritoriality in relation to international sanctions. This issue raises two questions on the extraterritorial reach of sanctions under international law, including international human rights law, and on whether States (or international organizations) are subject to extraterritorial obligations under human rights instruments in relation to the application and effects of sanctions.

The next heading is titled “Human Dignity and ordre public as Limits to the Exercise of Rights within European Jurisdictions?”. A paper under this heading deals with restrictions to the use of the fundamental right of free speech and refers to the several techniques that modern European Constitutions use to define these limits, one of which is human dignity. However, the dignity of social groups is a very problematic concept when used to curb public debates.

Under the heading “Freedom of Expression in the Internet. The Role of States, Citizens and Intermediaries”, a paper deals with the right to be forgotten initially created by the judiciary through the Regulation for the Protection of the Personal Data in 2016. However, under specific circumstances, the existing public interest can override the right to be forgotten, which still remains part of our everyday life and can be considered as a social and legal progress.

In the “General Conclusions” the author tries to convey the message of the Conference, the struggle between social and State discipline and free speech. Current challenges are giving the question a new light, namely the increasing privatization of the public space.

The second part of this ERPL issue includes contributions on the general theme of the Conference. The first paper considers how UK courts resolve disputes about the right to privacy and freedom of expression and how they use concepts such as “the public interest”, “personal space” and “autonomy” when doing so. The focus of the second paper under Article 10 of the European Convention on Human Rights is media freedom and protection of journalistic sources, hate speech, and free political debate as well as the necessity to balance this freedom with other fundamental rights and freedoms in light of the European Court of Human Rights case-law. The third paper under this heading calls for urgent improvements in the national legislation of Ukraine to ensure the proper implementation of the international and European human rights law provisions in order to protect IDPs. The final paper under this heading maintains that if universal Internet access is to be recognized internationally as a universal right, a derivative of the right to freedom of expression, perhaps, it is the right time to entertain the idea of an international framework convention to guarantee a minimal standard of practices acceptable for the exchange of information and opinions on the Internet.

The next Part includes papers presented or prepared within the framework of Workshops that took place during the Conference. In the context of the Workshop on “International Tax Law”, a paper deals with the new perception of tax norms, related to transnational phenomena, with regard both to the substantial rules and the procedural ones.

In the context of the Workshop on “The Right to Be Forgotten: The Balance between the Right to Privacy and Freedom of Expression”, the first paper contains a succinct analysis of the criteria referred to by the European bodies, the ECJ and the Article 29 Data Protection Working Party, for achieving the balancing between the right to privacy and freedom of expression and then examines the actors involved in the balancing of interests when the right to be forgotten is applied. The second paper deals with a new business paradigm which arises within the framework of the “digital economy”: new businesses often referred to as “internet intermediaries” establish themselves in various sectors of the economy. This enhances economic efficiency but may also be understood a a source of risks. This presentation aims at controlling the accuracy of these observations with regard to the newly established “right to be forgotten”. The final paper brings to discussion the particular place assigned to freedom of expression and right to information in the human rights system as reflected in the currently well-developed Ukrainian legislation and maintains that it is expedient to advance in Ukraine legal consciousness and culture to ensure the rule of law and the due balance of citizens’ freedoms and rights.

In the context of the Workshop “Interaction between the Right to Privacy and the Right to Equality in Human Rights Adjudication”, the first paper asks the question of where we go when we know that an equal distribution of specific benefits and burdens is either morally problematic or impossible and proposes that we should look at how the right to privacy interacts with the right to equality. The second paper under this heading outlines the current legislative framework related to hate crimes in Slovakia.

Finally, in the fourth part of this ERPL issue are presented the speeches pronounced on the occasion of the Laudationes to Professor İl Han Özay (speeches by N. Arat and E. Karakaş), Professor Robert Andersen (speeches by M. Gautier and I. Karkalis) and Professor Christian Starck (speeches by Th. Gross and Th. Antoniou).

S. Mouton, Freedom of Expression and Democratic Power: A Look at a Sensitive Relationship [IN FRENCH]

B. Mathieu, The Limits to the Exercise of Individual Rights on behalf of Requirements relating to the Immaterial Public Order and, particularly, to the Principle of Dignity [IN FRENCH]

H.E. Ambassador I. Jazairy, Extraterritoriality and International Sanctions [IN ENGLISH]

Human Dignity and ordre public as Limits to the Exercise of Rights
within European Jurisdictions?

Th. Gross, Human Dignity and ordre public as Limits to the Exercise of Rights within European Jurisdictions? [IN ENGLISH]

Freedom of Expression in the Internet.
The Role of States, Citizens and Intermediaries

S. Vlachopoulos, Freedom of Expression in the Internet. The Example of the “Right to Be Forgotten” [IN ENGLISH]

G. Anthony, Privacy and Freedom of Expression: An Interesting Tale from the UK [IN ENGLISH]

M. Leskoviku, Some Considerations on the Freedom of Expression in respect to the Case-law of the European Court of Human Rights (ECtHR) Interpretation [IN ENGLISH]

V. Ustymenko, IDPs’ Problems to Realize the Freedom of Expression and Other Fundamental Rights in Ukraine - The Right Not to Be Forgotten [IN ENGLISH]

P. Jonason, The Right to Be Forgotten: The Balance between the Right to Privacy and Freedom of Expression [IN ENGLISH]

A. N. Iliadou, Protecting Privacy Rights during the Digital Era of the Economy [IN ENGLISH]

A. Sanchenko, Legal Frames of the Information and Communication Area, Protected Privacy in Ukraine: General Overview [IN ENGLISH]

M. Patakyová, Freedom of Expression in the Internet - The Role of States, Citizens and Intermediaries: Case Study of the Slovak Republic [IN ENGLISH]

Information [IN ENGLISH AND FRENCH]

Freedom of Expression and Democratic Power: A Look at a Sensitive Relationship

The Limits to the Exercise of Individual Rights on behalf of Requirements relating to the Immaterial Public Order and, particularly, to the...

Human Dignity and ordre public as Limits to the Exercise of Rights within European Jurisdictions?

Freedom of Expression in the Internet. The Example of the “Right to Be Forgotten”

Privacy and Freedom of Expression: An Interesting Tale from the UK

Protecting Privacy Rights during the Digital Era of the Economy

Freedom of Expression in the Internet - The Role of States, Citizens and Intermediaries: Case Study of the Slovak Republic

Laudatio in honour of Prof. Robert Andersen, I. Karkalis