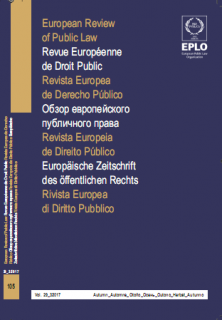 This ERPL issue starts by the text of the speech that A. Gromyko pronounced on the occasion of the annual Conference “Manuel Chrysoloras”, organized at the EPLO premises on April 4, 2017. The paper maintains that Brexit should lead to a certain awaking for the political establishment in the EU. It looks at Brexit with a view from Russia and maintains that a spin-off from this process may become understanding that a new edition of a Cold War with Russia is a dangerous project, which runs against the national interests of all sides.

Several articles follow in this ERPL issue. The first article focuses on the model of the UN internal system of administration of justice, which is comprised of the UN Dispute Tribunal, as the first-instance Tribunal, and the UN Appeals Tribunal (second instance), as the highest Administrative Tribunal within the United Nations. The article enlarges upon the administration of justice system at the UN prior to 2009, the established two-tiered system of UN Tribunals in 2009, the right to appeal against the first-instance Tribunal’s judgments, and the grounds of appeal and the key characteristics of the appeals proceedings. The second article examines the appointment of memebrs of Supreme Audit Institutions, which in the EU derives from the competence, exclusive or shared, of the legislative power. The SAIs’ members personal status puts them in a position to exercise their duties with impartiality. The third article examines the institution of the Conservatoire du littoral (Coastal Conservation Authority), which constitutes a fundamental tool for the protection of the coastal areas in France. It presents its action, competences, and aims. The final article in this ERPL issue intends to analyze German civil service in four steps: it describes some basic elements of the modern state and the primordial importance of civil service; it presents some basic data of the civil service and its legal framework; it gives information on size, structure and development; and finally it illustrates the need for reform.

In the section of Chronicles of Constitutional Law, the first one, coming from Slovakia, analyzes the interplay between constitutional rigths and freedoms and surveillance in Slovakia by analyzing the implementation of the data retention directive and the electronic toll system.

The second and last chronicle in this section comes from Ukraine and presents the dynamic developments in the Ukrainian constitutional law during 2016 due to the introduction of amendments and additions to the Basic Law of Ukraine related to justice, as well as to deliberations, not yet concluded in 2016, on changes related to the decentralization of public power.

Next, in the section on Administrative Law, the first chronicle assesses the recent developments with regard to the Article 40.4.2 process, which institutionalizes the common law remedy of habeas corpus within the Constitution of Ireland.

The second chronicle in this field provides an overview on amendments introduced to the Portuguese Public Procurement Code by Decree-Law no. 111-B/2017, of August 31, 2017, which aimed to transpose to the Portuguese jurisdiction the 2014 Directives on public procurement.

In the section of Jurisprudence, the Chronicle on the Jurisprudence of the Court of Justice of the European Union maintains that the Union judicature has to be always vigilant in order to guarantee that the replies to the different, often very delicate and urgent, situations are not only efficient but also, and above all, in compliance with the requirements of the fundamental rules on the functioning of the institutions and to ensure that the citizens’ rights are respected.

In this section, a chronicle from Portugal follows, which gives an overview of the main changes introduced by the Portuguese Constitutional Court in 2015 and 2016 as well as the most important decisions issued in that period.

This ERPL issue continues with the review of an interesting selection of books coming from Austria, Ukraine and Spain, whereas the presentation of eight books received by the EPLO Library concludes the issue.

A. Gromyko, Brexit: The View from Russia [ΙΝ ENGLISH]

R. Chouvel, The Personal Independence of Supreme Audit Institutions of Public Finance Members in the States of the European Union: The Status of Liberty? [IN FRENCH]

S. Florio, The Conservatoire de l’espace littoral: A Cornerstone of Protection of Coastal Spaces in France [IN ITALIAN]

A. Troupiotis, Court of Justice of the European Union [IN FRENCH]

A. Maniatis [IN SPANISH]

Brexit: The View from Russia

The Personal Independence of Supreme Audit Institutions of Public Finance Members in the States of the European Union: The Status of Liberty?

The Conservatoire de l’espace littoral: A Cornerstone of Protection of Coastal Spaces in France