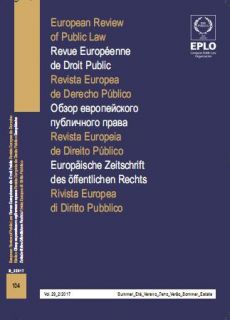 The first paper in this ERPL issue is based on an open lecture given by Professor Giuliano Amato, Former Prime Minister of Italy, in Moscow on April 17, 2017, to the students of the Law School of the Russian Academy of National Economy and Public Administration, on the occasion of the inauguration of a Library dedicated in European and International Law hosting EPLO Editions and of the signing of an agreement for the establishment of a Euro-Russian International Center for Legal Studies and Programs of which Professor Amato accepted the position of the Honorary Scientific Director. In the text of his speech, Professor Amato maintains that it is unthinkable not to use the law in the fight against terrorism but that it would be unreasonable, in using the law and other resources in this context, to do it without cooperation with the other States similarly committed to fighting terrorism.

Several articles follow in this ERPL issue. The first article aims at grasping the content of “model” in comparative law through the study of the Nordic model of public administration. The next article examines the lack of adequate judicial review of and protection against factual conduct as well as instruments to close that gap in the EU’s ‘complete system of judicial review’ promised by the Court of Justice since its 1986 Les Verts case. The last article in this issue deals with the lack of representation in Greece today. It presents the electoral results from 1996 to 2015, with an emphasis on the parameters necessary in order to observe if and to which extent there is a lack of parliamentary representation.

In the section of chronicles on Constitutional Law, the first one, coming from Cyprus, deals with application no. 1/2016, filed by the Attorney General of the Republic of Cyprus who requested leave for lifting the immunity of a Member of Parliament.

The second chronicle first elaborates on the so-called “Ajos case” and concludes in this context that it falls outside the competence of the Danish courts to give precedence to EU law infringing the legal positions of private persons under Danish law. It then turns its attention to the so-called “Election case” on the Danish Parliamentary Act.

The chronicle coming from Georgia examines the crucial role held by the Central Bank in the development of a country. It maintains that, in order to perform its functions perfectly, the Central Bank shall be equipped with all needed supervisory and monetary instruments and the Constitution and legislation of a country shall ensure that the Central Bank has the authority to exercise the mandate imposed upon it.

The chronicle on Italian Constitutional Law presents developments such as the negative outcome of the advisory referendum on constitutional reform that led to the resignation of the Prime minister  and the formation of a new government led by the former Foreign Minister Paolo Gentiloni.

The Constitutional Law chronicle coming from the Netherlands deals with issues such as the Dutch government’s proposal to Parliament to ratify the EU-Ukraine Association Agreement, the modernization of the Ministerial Responsibility Act and a new Intelligence and Security Services Act presented by government.  Other developments such as a State Committee on the Parliamentary System, and the conviction of Geert Wilders, the leader of the far-right Party for Freedom, on insulting a group and incitement to discrimination are presented.

The last chronicle in this section comes from Russia and reviews constitutional amendments in 2016, among which the Constitutional Court’s judgment in the case of Anchugov and Gladkov was of particular significance. The State Duma elections, preceded by a number of substantial amendments to election legislation, the toughening of the regulation of the Internet and other events are discussed in this chronicle.

The second chronicle in this section describes the administrative reforms in Italy in 2016: the implementation of the reform of Public Administration (Law 124/2015) and the main changes introduced; the new Code of public contracts and the new measures regarding the evaluation of public administration’s performance are analyzed. Finally, the chronicle examines the main measures contained in the Budget Law for 2017.

The third Administrative Law chronicle is devoted to actual amendments of the administrative law occurred in Russia in the field of state antimonopoly control and in public and corporate procurement in 2016 and examines the main innovations and changes to the regulations on the contract system in the field.

A chronicle on the CJEU jurisprudence follows, which studies the compatibility of Article 26 of the Greek Inheritance Tax Code with the free movement of capital, on the occasion of the CJEU decision of 26 May 2016 in Case C-244/15 European Commission v. Hellenic Republic.

This ERPL issue continues with the review of an interesting selection of books coming from Italy, Greece, Slovakia and the United Kingdom whereas the presentation of eight books received by the EPLO Library concludes the issue.

G. Amato, Terrorism and the Law. A Comparative Overview [IN ENGLISH]

B. Georgopoulou, The Dimensions and the Consequences of the Crisis of Political Representation in the Greek Parliamentary System [IN FRENCH]

I. Kalandadze, Georgia / Géorgie [IN ENGLISH]

M. Stylianidou, Court of Justice of the European Union [IN ENGLISH]

Terrorism and the Law. A Comparative Overview