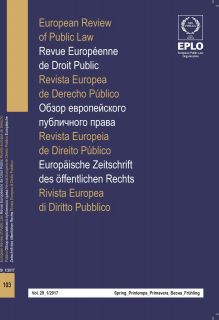 In this issue of the ERPL are published the proceedings of the annual conference of the EGPL organised from the 9th to the 11th of September 2016 on the island of Spetses (Greece), on the subject “Rights across Borders: Citizenship and Immigration in Europe”.

Under the heading “General Introduction: From National Membership to Territorial Belonging: The Rights (and Costs) of Immigrants between Democracy (or National Self-Determination) and Human Rights: The Specialty of Migration Law”, the first paper, drawing on the failure of the European border security and migration policy amidst the refugee crisis, claims that such an unsatisfactory state of affairs can only be brought to an end if the European Union manages to effectively protect its external borders on a permanent basis. It then goes on to discuss that it is up to the Member States to grant access to their national territories according to their Constitutions by either granting national asylum or using other similar mechanisms covered by the national immigration legislation, as public international law does not recognize any general or unlimited right to migration beyond the ‘non-refoulement’ principle. The second paper under this heading discusses the concept of EU citizenship, as well as the rights and duties it entails, and the striking shift in the relevant CJEU case-law as a result of the recent Dano and Alimanovic judgments. These judgments establish limits on the right of EU citizens to social assistance in host Member States and the right to reside in another Member State appears to be made dependent on the worker status of the citizen. The paper highlights questions that remain such as: Were these decisions an attempt to address the debate on ‘welfare tourism’? Is the CJEU backtracking? What is left of the previous jurisprudence?

The next heading is titled “National Membership - Acquisition and Loss of Nationality”. The sole paper under this heading highlights some recent developments and trends in the field of nationality in international and national law and identifies a number of problems relating to nationality rights across borders. It argues that there is a need for increased European cooperation and coordination in this area and that member states of the Council of Europe and/or the EU should take steps to establish a suitable forum for a discussion of shared principles in relation to the acquisition and loss of nationality and, eventually, the setting of new standards.

Under the heading “Territorial Belonging - Inclusion and Exclusion from State Territories”, the first paper demonstrates that, despite the fact that the contemporary world is based on the post-sovereign states, whose territorial sovereignty is restricted by international and transnational norms, in the present ‘crisis’, the argument of territorial sovereignty served some states to restore both - the state’s power to decide who can enter its territory and who can claim membership in its community. The authors argue that if exclusionary approaches to migrations seen exclusively through the lens of the core sovereign prerogative continue to prevail, it would abandon refugees and the further building of an ‘ever closer union among the peoples of Europe’. The second paper deals with the influence of European standards on the law on foreigners. This influence, either limited or particularly evident, has led, in most cases, to an increase in the protection granted to foreigners while most recently this influence seems to concern more the issue of the return of foreigners. The third paper discusses the complexities of French legislation as concerns the law on foreigners and analyzes the French situation from a more practical rather than theoretical perspective, beginning from the presentation of the remedies before the administrative judge. It results from this analysis that it falls under the competence of the jurisprudence to define the conditions for an optimal arrangement between the court proceedings and to ensure a proper administration of justice.  The final paper under this heading discusses the main relationships that unite the State to its territory. If the concept of territorial competence is sufficiently precise for general analyses of the State, its exact scope may be controversial for the legal acts or relationships having transboundary elements. As international law foresees many titles for the competences exercised outside the territory of the State, four main types of legal instruments are used to disentangle the competences of States.

The “General Conclusions” point at some of the questions debated: the relationship between nationality and citizenship, the different levels of moral duty and the spheres of solidarity, and cultural homogeneity as a precondition for democracy.

The second part of this ERPL issue includes papers presented or prepared within the framework of Workshops that took place during the Conference. In the context of the Workshop on “The Return of Borders: Is Schengen Really at Risk?” and “The Migration Crisis: How to Cope with It?”, the first paper details the Workshop’s discussion of several dimensions of the migration crisis, notably the problems encountered by the EU and its Member States to apply the Schengen regime and the Dublin system. It also discusses the future perspectives of the overall asylum and immigration cooperation at EU level and finally a presentation is made of the Police Cooperation Convention for Southeast Europe. The second paper deals with the contradictory phenomenon of intense labor migration from Ukraine to the EU, which is considered from the perspective of the risks entailed as examined in the paper.

In the context of the Workshop on “Habeas Corpus and Administrative Detention of Migrants”, the first paper provides some guidelines and case-law in order to contribute to the clarification of the rights of asylum seekers in the complex context of administrative detention, especially as it relates to Habeas Corpus, such as it has been developed by the national legislation of many Council of Europe’s member states but still being far from instituting a common European procedure. The second paper discusses the hotly debated issue of the legal regime of “administrative detention” of immigrants under Turkish law and the need to reconsider the corresponding legal framework. The final paper brings to discussion the particular situation of deprivation of liberty of asylum seekers and shares concerns regarding the real impact of the new detention regime created by the EU Reception Conditions Directives of 2013.

In the context of the Workshop “In Search of Transnational Administrative Law”, launching a multiyear scientific program by an international group of European scholars, the first paper discusses the inherent transnationality in the very nature of Environmental law, with a core issue being related to transnational administrative procedure. The following paper addresses the matter of cross-border procurement problems and the possible entities that may be created as a framework within which transnational relations are held, focusing on one of them, the European grouping of territorial cooperation. The penultimate paper discusses the administrative phenomena going beyond the strict national framework and the link between transnational administrative law and private international law. The final paper under this heading notes the challenges of transnational cooperation in the field of EU competition law, particularly regarding the practical barriers that may hamper the cooperation and the legal questions that may arise.

Finally, in the third part of this ERPL issue are presented the speeches pronounced on the occasion of the Laudationes to Sir Stephen Sedley (speeches by Professors J.-B. Auby and J. Morison, The Right Honorable Sir John Laws, and The Right Honorable Lord Woolf, CH).

GENERAL INTRODUCTION:
From National Membership to Territorial Belonging:
The Rights (and Costs) of Immigrants between Democracy
(or National Self-determination) and Human Rights:
The Specialty of Migration Law

E. Ersbøll, Rights across Borders: Citizenship and Immigration in Europe - National Membership, Acquisition and Loss of Nationality [IN ENGLISH]

V. Beširević / T. Papić, From Sovereignty to Post-Sovereignty and Back: Some Reflections on Immigration and Citizenship Issues in the Perspective of Refugee ‘Crisis’ [IN ENGLISH]
M. Gautier, Consideration of the European Standards by the French Law on Foreigners [IN FRENCH]
M. Guyomar, Territorial Belonging - Inclusion and Exclusion from State Territories [IN FRENCH]
K. Wojtyczek, Territory and the Principle of Territoriality in Public International Law [IN FRENCH]

The Return of Borders: Is Schengen Really at Risk?
The Migration Crisis: How to Cope with It?

J.W. de Zwaan, Schengen and Migration - Is Schengen at Risk and How to Cope with the Migration Crisis? [IN ENGLISH]
A. Sanchenko / O. Zaichuk / Y. Zaichuk, Ukrainian Labour Migration: Risk for the Schengen or Ukraine? [IN ENGLISH]

In Search of Transnational Administrative Law

Rights across Borders: Citizenship and Immigration in Europe - National Membership, Acquisition and Loss of Nationality

From Sovereignty to Post-Sovereignty and Back: Some Reflections on Immigration and Citizenship Issues in the Perspective of Refugee ‘Crisis’

Consideration of the European Standards by the French Law on Foreigners

Territory and the Principle of Territoriality in Public International Law

Rights across Borders: Citizenship and Immigration in Europe - General Conclusions

Schengen and Migration - Is Schengen at Risk and How to Cope with the Migration Crisis?

Ukrainian Labour Migration: Risk for the Schengen or Ukraine?

The European Union at the Monetary Turning Point: Towards Genuine Integration or Dis-integration?

A Brief Note on Normative Defeasibility in Public Law

The European Banking Union: An Introduction to the Legal Framework

The Powers of the Union in the European Economic Governance: New Transfers of Sovereignty

Directive 2014/92/EU of the European Parliament and of the Council, of 23 July 2014, and the Access to Payment Accounts with Basic Features

The European Banking Governance. The Single Supervisory Mechanism and the Union’s Constitutional Challenge