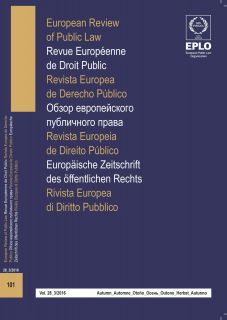 Several articles follow in this ERPL issue. The first article seeks to provide insights into the general principles of EU law for audit practice, for example those of proportionality and legal certainty which are highly relevant to auditors and beneficiaries of EU funds. For that reason auditors should apply general principles of EU law during the audit process and use them as a frame of reference in applying audit standards whereas for beneficiaries of EU subsidies, the application of these general principles of EU law in audits is fundamental so that they may perceive that they are being treated fairly and in order to develop a relation of trust between auditor and auditee. Through the lenses of German, Belgian, and British election law, the second article analyzes the legal justifications of unequal compositions of elected assemblies. It concludes that while this inequality is justifiable to an extent, not only should the parliament (as a whole) and its members (as individuals) represent the governed people, but also parties must be expected to be sufficiently representative of the people. To support this argument, this article draws upon relevant decisions from the European Court of Human Rights. The third article proposes a theory on private takings through an approach to their major legal problems, ultimately arguing that also other constitutional clauses such as democracy or social state and not only the rule of law are called to decisively influence the legal treatment of such takings. Finally, the fourth article discusses the financing by individuals of the cultural life in France. The article concludes that while foundations, associations, and endowment funds have become major tools for patronage by individuals working towards the safeguarding of heritage, further efforts are being made to create new structures such as “crowdfunding” or participative funding.

In the section of Chronicles of Constitutional Law, the first one, coming from Austria, discusses the amendments on the jurisdiction of the Constitutional Court as well as on the parliamentary control rights. It also examines the repeal of the Federal President final ballot, which entailed decisive statements regarding election jurisdiction and triggered political and constitutional discussions.

The second chronicle coming from Slovakia analyzes the legal definition and application of the constitutional right to protection of privacy, personal honor and dignity and its restrictions in regards to the right to know the truth about the country’s authoritarian past after the establishment of the Nation’s Memory Institute in 2002.

Next, in the section on Administrative Law, the first chronicle identifies the three topics that dominated developments in Austrian Administrative Law in 2015 and 2016: refugees, terrorist threats, and the presidential election. The chronicle then goes on to discuss additional developments outside these fields, including revision of the electoral law, steps towards the regulation of automated driving systems, the strengthening of the ban on the cultivation of genetically modified organisms, and the liberalization of the possibilities of medically assisted reproduction.

The second chronicle, acknowledging the reinforced need and scope of judicial review of the administrative action, first identifies what the concept of regulations includes in Belgium, and then describes the organs vested with the judicial review of constitutionality and the powers granted to them. It concludes by examining the nature of constitutionality review towards a regulation.

Focusing on administrative law in Portugal, the third Administrative Law chronicle provides an overview of the new law on the public access to administrative documents on matters of environmental information and of the Portuguese Government’s Code of Conduct, both enacted in 2016 and aimed at shaping a more transparent, impartial and close to the citizens public administration.

Coming from Slovakia, the fourth chronicle is focused on two main legal regulations: the first is completing the system of transparent and effective public spendings by stating the public administration bodies’ obligation to use the electronic market in the purchase of goods and services from public and municipal bodies, and the second focuses on the adoption of the procedural code for the administrative proceedings before the courts. The case law part of the chronicle focuses on the decisions delivered by the Supreme Court relating to the asylum procedure, the positive obligation to respect the UN Convention, and the right to access to the court.

In the section of Jurisprudence, the Chronicle on the Jurisprudence of the Court of Justice of the European Union focuses on the surge in institutional (or inter-institutional) litigation in 2015, which goes to the heart of a core issue related to the powers of the Union: who is empowered to act, under which conditions, and which are the elements to be taken into account in order to act validly. It then places this discussion in the context of the evolution of the economic crisis, which offers a new field of concrete action and application of Union policies, but, at the same time, creates the need to frame them within adequate limits.

This ERPL issue continues with the review of an interesting selection of books coming from Austria, Slovakia, and Ukraine whereas the presentation of seventeen books received by the EPLO Library concludes the issue.

A. Troupiotis,Court of Justice of the European Union [IN FRENCH]

Can Electoral Inequalities Be Legally Justified? Analysis of Belgian, British and German Law through the European Court of Human Rights Case Law

A Theory on Private Takings: Rule of Law, Democracy, and Social State

Public Expenditure and its Rationalization: Legal Regulation in the Republic of Lithuania

Audiovisual media ownership in Albania. Decision no. 56/2016 of the Constitutional Court

First-Instance Judgment in the Radovan Karadžić Case in the Context of Political Circumstances within the Dayton Constitutional Framework: The View...